The 1st batch of photos are from Boy & French Bulldog are Best Friends and the 2nd batch are from 11 Incredibly Important Photos Of A Baby Covered In French Bulldog Puppies. 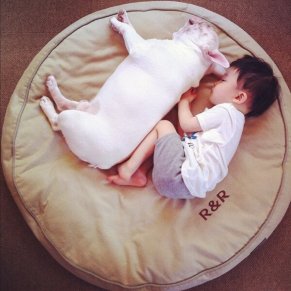 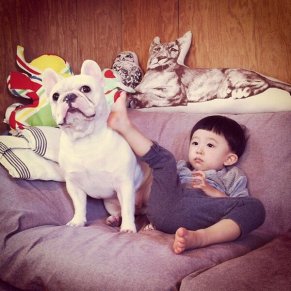 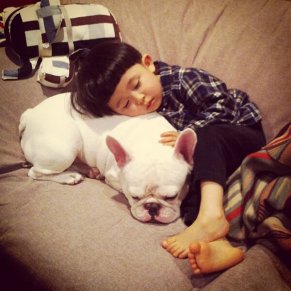 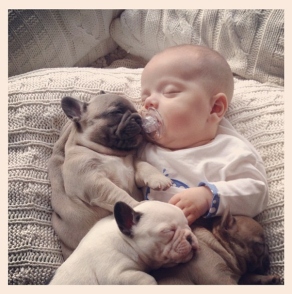 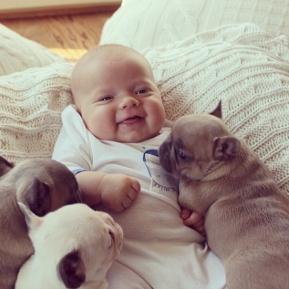 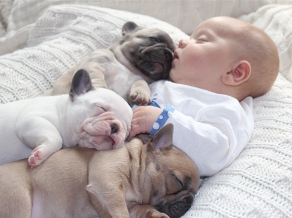 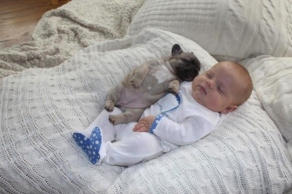 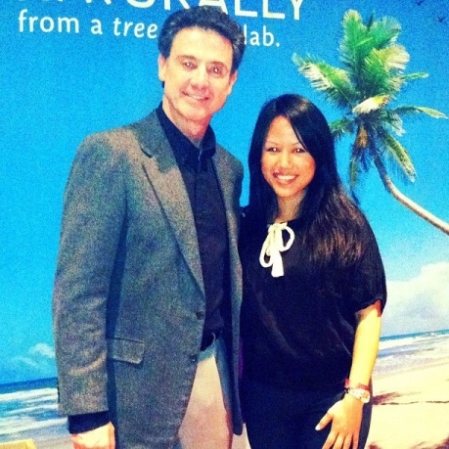 Rick Pitino had a good day. NCAA champs. New Hall of Famer. Son got the Head Coach gig. And then we all spent the day at the beach. 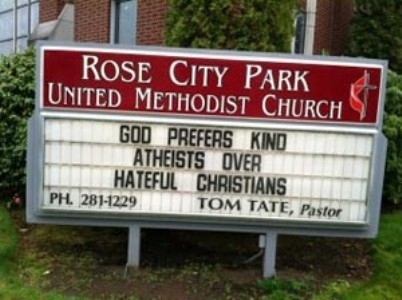 Ain’t that the Truth! 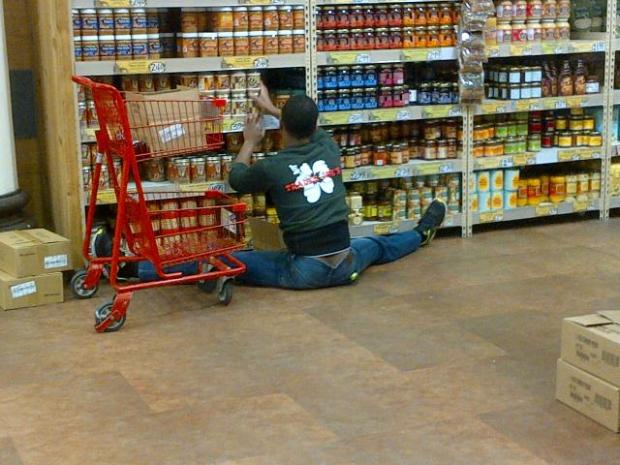 I took this photo in my local Trader Joe’s market this weekend. That is all.

Prosciutto of Pig’s Past 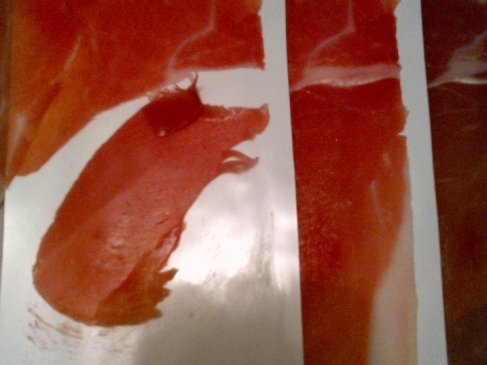 I write this with fear trembling in my fingertips. The other day I was alone in the kitchen grabbing some prosciutto for a snack (my #1 favorite food of all time). As I peeled some off the wax paper and placed it on a plate, I turned around and looked down to find…… A PIG. A scurrying, hairy-eared, (maybe even boar-like), fleeing pig. I was so scared, I took a photo— and then ate it real fast. All of it – I ate all of the prosciutto like Miranda ate that giant cookie cake that said “I Love You”. If I eat it, it doesn’t exist…

A Proposal, Analyzed to the Billionth – Happy Valentine’s Day! 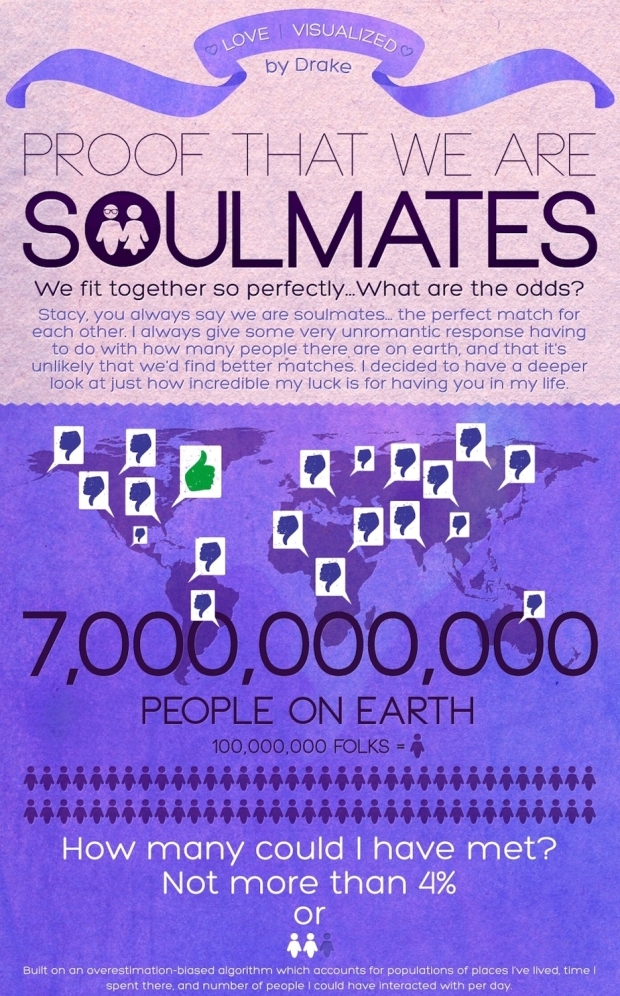 END_OF_DOCUMENT_TOKEN_TO_BE_REPLACED

Nerdiest Handshake For The Win!

How much do I love this nerdy-geeky handshake between Knicks teammates, Landry Fields & Jeremy Lin! I mean, they PUT AWAY THEIR READING GLASSES haha!

This is also a shout-out to Landry, who went to my high school Whoop-Whoop! And Jeremy because… he’s just a cool Asian. Whoop-Whoop! 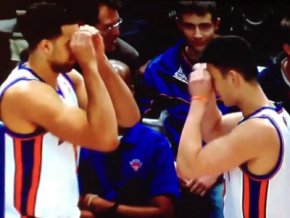 Skittles For Every Touchdown 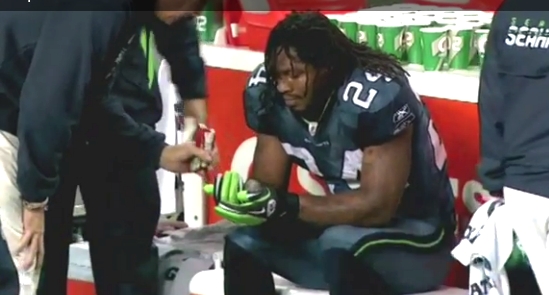 Here I go, trying to talk about sports again. Marshawn Lynch of the Seattle Seahawks was filmed eating Skittles after scoring a touchdown in their winning game against the Philadelphia Eagles. Why Skittles? Because that’s what his mommy used to give him when he played football in high school 🙂  After the game, Skittles offered him a 2 year’s supply of the feel-the-rainbow candies.

What a Crock of Stock! 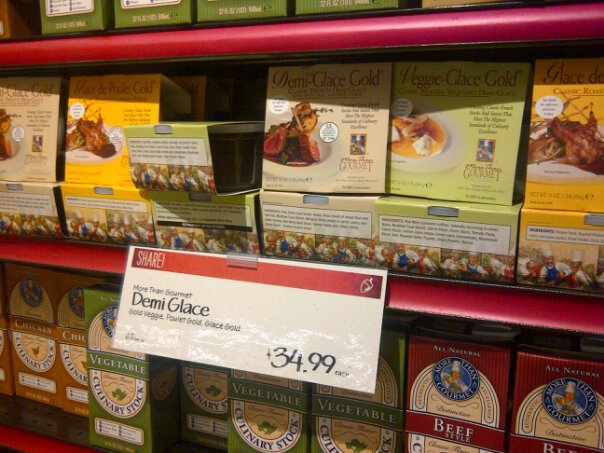 Reached for a nice carton of chicken stock and –WHAt THe..! Whole Foods, you’re not gonna trick me into buying $35 broth this time!..

I had never heard about the Glenwood Hotel in Brooklyn until it was mentioned in the news as being the location of a terrible crime. As I am often researching hotels for business and friends, I am well aware about the pitiful conditions of NYC’s hotel industry (tiny dirty rooms, exorbitant prices, too good to be true, etc.) BUT THIS IS BY FAR THE WORST OF THE WORST OF THE WORST places to stay I have ever come across. The few reviews out there all say sleeping on the street would be better and describe what is often the most terrifying/traumatic experience of their lives.  The review below made me laugh in fear so hard that I found it difficult to get past some of the words. Please enjoy and please be warned:

Which came first, the bugs or the guests?

“So, looking for a NY getaway on the cheap? Have I got a suggestion for you! The streets, or hey, just ride the subway all night. Even the internet wouldn’t want to publish pictures of my feet, legs, arm or back, due to the insane amount of bedbug bites I have on me. In roughly 72 hours, I was able to get about 9 hours of sleep. The room is smaller than your closet. “I don’t have a closet” you say? It’s still bigger! My first night, it was roughly 90 plus degrees in there. But that was the comfortable part. The ceiling is a screen door. There was a guy constantly sitting right outside my room who looked like the evil love child of Mickey Rourke and Gary Busey. The gent “sleeping next to my room, loved to wake up at 5 every morning and hock phlegmies for an hour or so straight. And that is when he stopped snoring. He also liked to cut some long gas passages, the last one I clocked at roughly 23 seconds. My guess, he was no more wanting to use their bathroom than I or the rats were. The rats, you don’t see them so much as hear them, and I think they were weary of the surroundings as well. The guests, many of them residents. The ladies were kind of nice, because they’re hookers namely. The evil creep behind the cage was somehow in cahoots with them. One guy likes to sit in the lobby and sleep and drool ropes. I also saw him going into the bathroom, his pants were not part of the deal, but he did have his hands over his crotch and buttocks as the bathroom trip clearly got started before he could get there. The shower was scary, and if you can sit on their toilets, you will likely get leprosy. And then, the bedbugs. Oh, the bedbugs are RAMPANT! In my 8 to 9 hours of sleep over three days, I was able to get hundreds, yes hundreds of bites. And I never once pulled back the sheets. No one offered to wash or change them, so you can still see my bloodstains if you go now. It is not just that they have bedbugs, they are the SOURCE of the bedbugs. NY is supposed to be having an issue with them, and if the D.O.H. would stop accepting bribes, and burn the place down, then burn the ashes, the bedbug problem would likely end. Not just in NY, but the whole wide world. Seriously folks, graveyards are a less creepy place to sleep. They don’t mention their name on Craigslist, but it is the $30 ad with the tiny bed. It’s so bad, you may just want to avoid Brooklyn altogether. I’m going to go write a horror movie about the place, and you know what? None of it would be fiction.”

I honestly can’t wait until DemianC publishes his first screenplay or book.